After years of planning and preparation, construction has finally begun on the Schilling Road Fire Station. Here is a quick synopsis.

As reported in the last High Prairian (March 2018), the Washington State Legislature appropriated $434,000 in its 2017 Capital Budget for construction of the new Schilling Road Fire Station. The Capital Budget was signed by the governor in January 2018. In March and April, the Fire Commissioners and Department Officers revised the building specs and drawings, then sent out a request for bids. The bid from Goldendale contractor Rhoades & Sons Construction was chosen on April 17, and a construction budget based on that bid went to the Department of Commerce. A contract was signed with the DOC to administer the state funds. Finally, the Fire District awarded the actual building contract and construction could begin. Current construction status:

The contractor has ordered the metal building.

The footings for the building have been dug out and framed, ready for the concrete pour. (See picture.)

The power pole has been installed and the power run completed from across Schilling Road.

The Schilling Road pavement contractor has completed the access to the site by installing a new culvert.

We anticipate the building to be erected by August if all goes as planned. 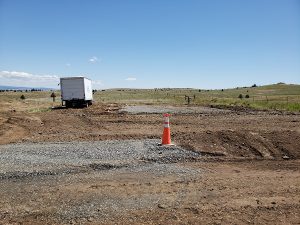 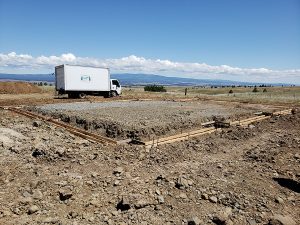