“I’ve got a catastrophe,” Mr. Stanley Crocker told Marcia Buser of Columbia Gorge Cat Rescue (CGCR).  Mr. Crocker, at 96, needed help with an unexpected number of kittens he found one morning on his porch.

“I had four female cats, I couldn’t trap this past fall, and now they’ve all had kittens; 13 in all.”

As volunteers for CGCR, whose mission is to spay/neuter feral cats, Marcia contacted me and Elke Neubauer to meet Mr. Crocker and come up with a plan. We met Mr. Crocker at his ranch on Simcoe Mountain Road in Centerville, home to the Crockers since the 1890’s.

We followed him in his Gator as he headed around the garage, where the mother cats had set up house.

“You should see what happens when I bring out the food. They come out and gather around my feet. I just bought $65 worth of cat food! I know if I don’t get them fixed soon, I will end up with 100!! So what can you do for them? You won’t put them to sleep will you?”

“No, if they can be socialized we’ll find homes for the kittens, but we’ll need to bring back the adult cats.”

That was okay with Mr. Crocker, because according to his grandfather, he knew a well-fed, fixed cat is the best hunter.

Elke and I set up the traps made available by CGCR and explained to Mr. Crocker when to bait them with food.  Over a period of several weeks, and more than a dozen attempts, the kittens, mothers, and Mr. Tom were trapped and taken to one of the several CGCR spay/neuter clinics held at the Lyle Activity Center.

Elke fostered the kittens in her home, so they could be socialized for adoption at two Portland Petco locations. The kittens were adopted, including two that captured the hearts of Elke and her husband Frank.

In addition to caring for cats, Mr. Crocker loves his horses, all 17 of them. Renowned for their accomplishments in competitive rodeo events as well as horse races, he is deserving of his reputation as a breeder of horses of quality, color, and performance.

Mr. Crocker’s family originally immigrated from Finland, coming out on the train to this area to farm  wheat.  Many of the original structures are still remaining on the farm, including a round barn built in 1915 which is registered with the state of Washington as a Heritage Barn.  His wife of 70 years passed away in 2011. Mr. Crocker has three sons —two in the area and one in Arizona, six grandchildren and six great grandchildren. 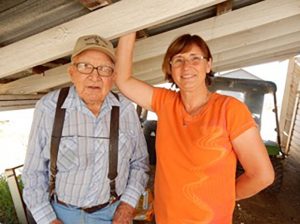 Thanks to the kindness of Mr. Crocker and the volunteers at CGCR, these cats and kittens along with many more now have a chance at a better and longer life.

To make a donation, schedule an appointment, adopt a cat, find a barn cat, or check out more resources, go to their web page, www.gorgecat.org.