Lyle Expects To Be Important Center 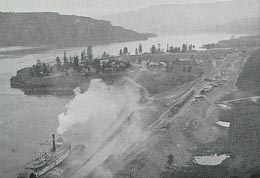 Terminus of Columbia River and Northern Railroad, Lyle, ca. 1905 Courtesy “So This Is Klickitat”

The town of Lyle, for many years the terminal of the Columbia River & Northern railroad, is a pluming itself in the hope of soon being a junction point and high hopes are entertained that the coming of the North Bank railroad, the grade for which has been completed past that place and the track for which is being laid along the Columbia at the rate of about two miles per day, above their will make that the important point. The little railroad which for years has connected the wheat sections of Goldendale and the surrounding country with the Columbia River at that point was formerly operated by an independent company, but it is now, according to popular report, been secured by the Northern Pacific interests and will be operated as a part of the Hill system. The town site of Lyle is owned by the railroad company with the exception of about four or five lots, the property of individual holders. Efforts made within the past year to secure lots have uniformly failed, as the railroad people declined to sell. Some time ago a man appeared there representing some capitalists who desired to establish a newspaper and bank in Lyle. They attempted to secure lots on which to attract business buildings but could not get what they wanted. The people of that place argue that the actions of the railroad people prove that when the North Bank road is completed that place will become one of the important points on the line and that the town will be made one of the pets of the big corporation. With a branch of the new road into the heart of one of the best wheat sections and Washington, that around the thriving town of Goldendale, with a fine site for a town, located on the Columbia River, the place offers an ideal location for a good-sized city and with the support of the railroad people should become one of the best business points on the new line of road. Fine fruit lands surround the townsite and it is expected that soon after the trains run into the place on the North Bank road these lands will be eagerly sought by home seekers and orchardists.