Cindy Henchell, (with lots of help from Ken Hansen)

Many Klickitat County residents may not realize one of the state’s largest employers resides right here in High Prairie! With a payroll of about 1.4 million “employees,” these workers happily work overtime hours without complaint, and complete their tasks merely for food, all within 300 square feet of space. This workforce consists of flesh-eating beetles, and work for Kodiak Bones & Bugs Taxidermy. 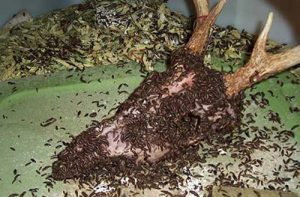 The “crew” hard at work.

Dermestid, or “flesh-eating beetles,” are the preferred method of preparing trophy skulls and bones, for eventual display. Unlike boiling, which can damage delicate structures, crack teeth and loosen sutures, dermestids are surgical in their cleaning, leaving the skull in pristine condition (so clean, in fact, they have no remaining flesh odor). Following beetle cleaning, the skulls are then “degreased” and lastly whitened with hydrogen peroxide. 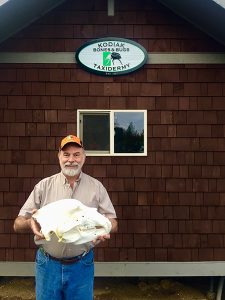 Kodiak Bugs & Bones Taxidermy was opened in 2007, at the request of the bear-hunting guides on Kodiak Island Alaska, who’s clients wanted their trophies beetle cleaned. This collaboration grew from a colony Ken Hansen was then maintaining for doing his own and hunting-partner’s skulls. With a long and liberal deer season, and Spring/Fall bear seasons, combined with unlimited waste fish on which to feed in the off-season, the dermestid population quickly bloomed. While many small business clean skulls with dermestids, Ken soon recognized the real potential was in the “byproduct…” Remembering his earlier difficulty in locating his own starter colony, Ken redirected his business to filling this need.

In 2015, Ken & Deb moved to High Prairie, following Ken’s retirement from NOAA Enforcement, where he supervised commercial fisheries law enforcement. Kodiak Bugs & Bones Taxidermy moved with them to a purpose-built shop; a big step up from the oversized storage room in a fish processor on the Kodiak waterfront where the business had been residing. Today, Ken limits his efforts to about 40 skulls annually, predominantly deer and elk.